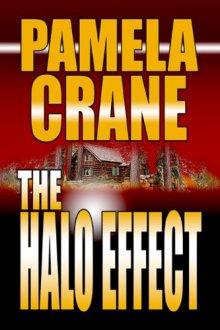 Pamela Crane on The Halo Effect

Seven years ago I lived out The Halo Effect, a story about a stalker with a severe mental illness and a hapless victim whose mistake was being too nice. In case you’re wondering, no, I wasn’t the stalker, though I admit I did eventually win over my husband with a little, let’s call it “persistence.” Whoever said “persistence pays off” knows what he’s talking about! (Don’t you stalkers go reading into that, though!)

In my own experience, I never saw the signs of my stalker’s obsession with me until it was too late. One day I was blissfully ignorant, the next I was being eerily followed in my car, then receiving photo-edited candid pictures of myself in the mail, creepy midnight text messages, and hang-up calls at all hours. When a neighbor informed me of a car parked down my street for the third day in a row and a man watching my house, the police got heavily involved… and I discovered some frightening details about a man I once thought was a normal, friendly colleague.
Part of me hated him for what he put me through, but then another part of me realized something. He was human. Broken, messed up, but human. Not the monster I saw him as. For several months my life was a thriller that I could not put aside or flip to a happy ending. In the end, though, the experience changed my perspective about a lot of things… including myself.

Unlike most thrillers where we love to hate the villain, The Halo Effect touches on the “likeable” villain inside all of us. Ever tell a little white lie? Ever cheat on a test in grade school? (I won’t mention how I passed my first grade spelling test when I couldn’t remember how to spell “who”—gee, I hope my teacher isn’t reading this!) Ever steal pens, paper, or even your desk stapler from work? (If you’ve ever seen Office Space, there are Miltons out there clinging to their red Swingline staplers as they read this.) We all have a dark side, some a little darker than others. What’s your dark side? If you don’t think you have one, look again. What secrets are you hiding? And if you do have secrets, have you been able to move on, leaving them in the past?

Ultimately my goal with The Halo Effect is to thrill readers with a twist ending I guarantee you won’t expect, because life is a lot like that. We find ourselves committing acts we never thought we were capable of… it’s the “twisted” side of ourselves that we assumed only existed among ax murderers and thieves. (Do ax murderers actually exist outside of horror movies, now that I’m thinking about it?) The good news, despite our bent toward craziness, is that there’s always a new day to change, to better ourselves. That’s where The Halo Effect eventually takes readers—to that point of hope and moving forward, for that is where our happily ever after is found.

It started with a glance. And ended with a nightmare.

Small-town girl Haley Montgomery meets two men who will change her life forever—the handsome Marc Vincetti whom she falls head-over-heels for, and the big-time Hollywood producer Allen Michaels who has the power to turn her screenplay into a movie and a ticket to a better future.

It seems as though life couldn't get any better—until things take a decidedly dark turn when Haley spots Marc with his former high school sweetheart and Allen develops a consuming obsession with her.

As Haley is faced with a choice between love and fame, Marc becomes the target of a stalker and Haley's life is thrown into a tailspin. Suddenly everything she thought she knew about Marc and Allen is completely wrong—and Haley's life will never be the same again…

Purchase a copy of The Halo Effect

One cut. One swift movement across pink flesh. In a moment of desperation it seemed so easy, so quick. But as my hand hovered above my wrist with measured pressure, the cold stainless steel blade taunted me. My courage waned; I trembled with each heartbeat that pulsed beneath the knife’s serrated edge. Only a thin layer of skin contained my precious lifeblood.

In picture-perfect clarity, I imagined the jagged grooves puncturing and tearing my skin. I regretted being so hasty in picking up the first knife I came across. A smoother blade wouldn’t take as long to do the job, and it likely wouldn’t hurt as much. The thought startled me, striking me with its ferocity. My vein jumped beneath the blade.

Was I actually deliberating the efficiency of my own suicide?

No doubts, no hesitating. One slice and this part would be over soon enough. Then I wouldn’t have to think anymore.

Press it down. I did.

I never felt the blade pinch and then slide into my skin, moving right to left, catching on the tiny bone about halfway across. My mind blocked out the pain, focusing my thoughts on one face – the only face that mattered to me now. Under the force of my steadied hand, I pulled the blade across and out, then leaned into the cushions of the sofa, watching blood ooze from the cut, building momentum as it trickled down my palm the way rain collects on a windowpane. The puddled droplets eventually found residence in the quilt beneath me that protected the microfiber cushions, the crimson chaotically adding to the kaleidoscope of colors. Oddly, I cared about the stain, though I wouldn’t be here tomorrow to see it.

Still one wrist to go, but I needed to make the phone call first while I still had the strength and ability to dial. I fumbled to open my cell phone – I was weaker than I thought – then concentrated on pressing each of the memorized numbers. The line rang. Voicemail picked up as I’d expected.

“I kept my promise,” I said, then hung up. There’d be no more pain after this. I’d be gone and everyone else could have their happily ever after.

This was the only way to make everything better. Life had become pain and suffering, and I was tired of suffering. I was tired of making others suffer. If only there was a hope out there to make it all worthwhile … but there was none. None that I knew of, at least.

I closed my eyes, feeling the energy drain from me, through the slit. My body relaxed along with my thoughts.

Some say they envision a collage of memories during a near-death experience. Others embark on that journey toward the white light.

I saw neither. Instead I envisioned one memory. The day that first tore my heart open and my life apart – when she trampled my life.

Pamela Crane is a North Carolinian writer of the psychological thriller The Halo Effectand wannabe psychologist, though most people just think she needs to see one. She’s a member of the ACFW and EFA, and has been involved in the ECPA, Christy Awards, and Romance Writers of America. Along with delving into people’s minds—or being the subject of their research—she enjoys being a wife to her best friend, mom, and riding her proud Arabian horse, when he lets her. She has a passion for adventure, and her hopes are to keep earning enough from her writing to travel the world in search of some good story material.